It seems to be a truth universally acknowledged that punctuation must be in search of comprehension. Punctuation as provider and eraser of interpretation. whatever(,)show(’)s up(!) plays games of syntax and symbols, where recognisable signifiers are fractured into layers to a brink of abstraction. Matas Buckus copies the materials of temporary road signs into his own proportions, and the magnetised pieces offer the illusion of sensual autonomy. The cut outs of magnets and layered, monochromatic adhesives form loosely overlapped, pareidolic compositions. The swerving lines of the cuts contrast with the cleaner sign-like shapes to invoke silhouette portraiture, a suggestion of dimension with minimal palette. The diverting colour ways of Hyo Young Chu’s layered silkscreens similarly evade declarations of depth. Drawing typographic elements into compositions, letters become figures with ornaments like clasps, bows, and patches. The dominant white ground is echoed in the work of Millie Rose Dobree, in which the repeated, incomplete greeting of a mylar balloon appears to have rotated between the stretched canvases. The zany lettering floats over a milky ground of wall paint, which shrouds graffiti-doodles and adhesives, somewhere between the wall of a toilet cubicle and a Polaroid of a party in the city. Fernanda Barhumi’s napkin dispenser differently frames the formulated typographical greeting by taking the role of a reply. ‘Graag Gedaan’ translates directly to ‘Gladly Done’, a phrase that absorbs the labour of servitude differently to ‘You’re Welcome’. Installed on a chrome tray, the typeface invokes the spanish servilletas; Barhumi’s gesture towards cultural difference. Max Glader’s glued fan of coloured A4 paper is also offered with tray-like framing. The ironic missive of ‘Enjoy/A Nice Cold/Girl’ is printed on the ‘top’ of the stack, leaving the determination of the attitude ambiguous. This work is an unusual part of a larger series of collages that incorporate representations of nostalgic and twee youth culture, often with cut or torn shapes. As with other works in the show, the reproducible multiple is complicated by the demonstration of the hand in its construction. w(,)s(’)u(!) follows two group exhibitions in a temporary space on Camberwell New Road, London, which invited participants to engage with formats. ‘Best Wishes,’ (Oct 2021) gathered grayscale drawings from 20 contributors. Arriving by mail, or passed by hand, it acknowledged the shift of peers toward drawing during the pandemic, and teased out the affect of bridging distance. Mascot (Dec 2021) brought together small sculptures by a range of artists whose digital nativity is part of their complication of identity. Whether post-Kaws collectible, earnest totem, aesthetic tourism, or serious sculpture, the show proposed to present personalising touches of the office worker’s cubicle, with the computers gone, and an intranet substituted by a network of international artists. Installed in a corner office of the former district court of Amsterdam, w(,)s(’)u(!) brings together this smaller group who are not native to, but have spent a period of time based in The Netherlands. The works seem to demonstrate a pedagogy of blurred codes in contemporary art and design, or at least a contemporary fluidity of reading image and language beyond fixed values of ‘high’ art. The nihilistic undertone of signs beyond comprehension is tempered by the keenness to display the craft, and deliberate movements away from monumentality. 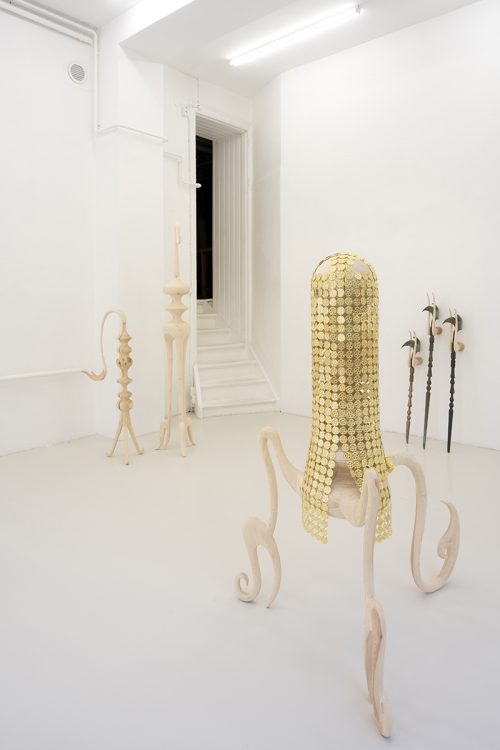