This exhibition is part of Curated by, the gallery festival with international curators in Vienna.
Advertisement

The Disorganized Body Beyond the major upheavals they imply in terms of democracy, organization, and nature of power, but also of geographies and territories, the violent geopolitical havoc at work in Eastern Europe—just as elsewhere in the world—has a profound impact on a different field: the bodies. Wounded, affected, missing, and displaced, they become the object of a bitter ideological and political battle, as we have recently been reminded of with the revocation of the constitutional right to abortion throughout the United States of America.  The Disorganized Body exhibition is thus understood as a digression related to the experience of the body. Be it present or absent, it has become an organ of reflection for artists from different parts of the world and contrasting practices but who have all—at least in part of their work—addressed corporality by taking a tangent of a frontal, standardized or idealized representation in order to better point out the disorders undergone by bodies. In Laurent Proux’s paintings, bodies, stretched or deformed, often fight, physically or metaphorically, as seen in Querelle (2020). The improbable face-to-face of two giant hands in a factory, where the potentiality of violence arises through bodies that are not real, and confront each other within an industrial tool, produces questions related to the capacity, productivity, and control of bodies and souls.  Minda Andrén’s work also evokes a fight in attitudes, gestures, and incongruent actions, which shift the use and the place traditionally assigned to bodies, as if the pose, the attitude, or the unfolding of daily life were inexorable to become subject to disruption.  With the comical and absurd sketches throughout his work, Michael Fanta makes black comedy cringe. The body is clearly present, rarely represented in its entirety, rather seen in fragments, in compositions where sexuality and physical or mental violence resemble forms of alienation. Anne Samat resorts to the ancestral figures of Sarawak in Malaysia to draw from them both a spiritual homage and mistrust of the contemporary world and the way in which bodies are absorbed and treated there, using silhouettes, spirits, ghost-like figures made with poor objects that inundate consumerist society.  The body is also—physically—absent in Yeni Mao’s work. Yet, at the same time, it is ubiquitous through emanations, traces, fragments, or clues, just like a ceramic organ that seems tormented by the coldness of a metal structure or what appears to be a carcass emptied of all traces of flesh. It is absent even in the Méduses by Sergio Verastegui, ghostly floating parachutes where no body is to be seen. Only some scrap from the destruction remains, and paradoxically, the diffuse light shining through the piece could be a signal calling to take refuge in it, as though perception were blurred.  Disorganization, where bodies are concerned, can also come from vision. Li Qing not only blurs eras and the limit between reality and fiction in his Windows Series: real wooden windows on which fictional scenes and imaginary landscapes with historical or phantasmatic hints are painted. He puts to the test the very logic of gazing; a disorganized gaze at the service of a disorganized body. 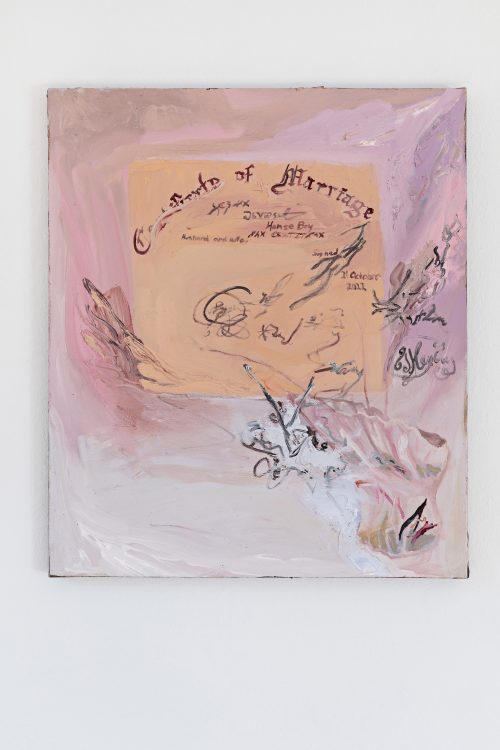