​ ​ ​ ​ ​ ​ ​ ​ ​ ​ ​ ​ ​ ​ ​ ​ ​ ​ ​ ​ ​ ​ ​ ​ ​ Natalie Häusler ​ DRILL ​ ​ October 15 - December 17 ​ ​ ​ Louche Ops is proud to exhibit Natalie Häusler's DRILL. This exhibition continues and furthers Häusler's practice of disturbing the boundaries between objects and language. In this installation, the variances of visual art and poetry are represented by a series of new sculptures and a sound piece. The aluminum sculptures that spiral from their point of suspension allude to gravity and gravity withheld. The kinetic potential of these works point towards intrusion and extraction, the penetration of ground and substrate. In seeming contradiction, these forms also recall the spiraling ribbons of rhythmic gymnasts. Often, this type of gymnast twirls a ribbon while they're in motion, resembling a mechanized animation hovering around their bodies while they perform their routines; a soft hardware activated by the trained hand. Both occasions elicit excitable, militant effects. The word drill reverberates as verb and as noun, puncture, repetition and rehearsals of victory over vacant space. While the tendency of language to gather around objects seems driven by its frustration with the muteness of form, the climactic exhibition of this frustration is often, itself, an inchoate procedure. 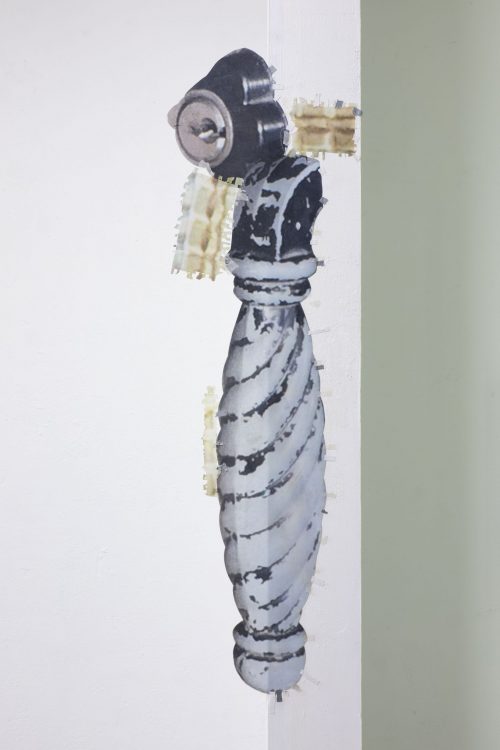