The installation “Forever Active” reflects on the urge to stage our lives to a more attractive version of reality: to stay fit, grow, and to be successful on all levels. These are the characteristics of a self-portrait accepted by society and reinforced by the beginning of the social media era. The work "Forever Active" reacts to the artificial happiness and examines it from a critical point of view. In the pavilion "Mother Of Pearl"* there are three works on display. Two widespread arms, installed above a round window, a silver vitrine placed in the opening and a pair of Track Sandals on the floor. ”Forever Active” is written on the belts of the sandals and the words are facing towards the viewer. Imagine a selfie-image shot at a rave on the beach during a golden sunset with the silhouettes of thousands of hands in the air. The installation reveals the same "ingredients" but the pavilion remains loud in its silence. The widespread arms are referencing the particular gesture, that shows the "common coolness" of the place and of the people being there. It is an allegory that represents endless happiness, while underneath lies the desire to promote oneself and to raise a social rating. The silver vitrine has a pure, open and unspoiled identity. In contrast with it stand the reinterpreted Balenciaga sandals. The design breathes professional outdoor sports, but in reality the appearance is deceiving, because they are not fit for such activities. The promise of the product or the promises showcased on social media images are only superficially full-filled. *In the summer of 2021, the artist collective Mother Of Pearl has designed and realized an equally named pavilion for St. Florian near Linz in Austria. The Mother Of Pearl pavilion is a long-term and "holistic" art project. It is an architectural intervention that brings together art, nature and people, and through which the collective's own understanding of art is to manifest itself. Mother Of Pearl is an artistic-architectural intervention, a meeting place, an exhibition space, a space for concerts and performances. Mother Of Pearl is located on the site of the St. Florian Abbey Ponds in the center of the community of St. Florian. The pavilion is intended to encourage artistic freedom and transdisciplinary dialogues. (The exhibition is still open by arrangement after the end of the official exhibition period.) 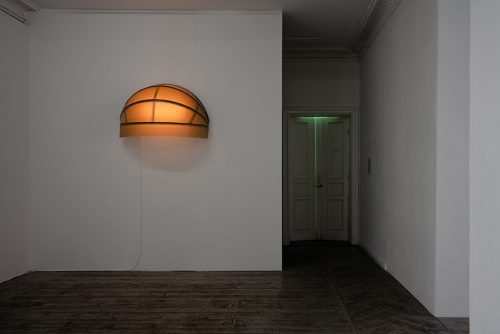