'How much should I tell you?' asked Stephanie Stein after we watched her hypnotic video Oase (40'' looped, 2022). Her question stayed with me as I considered how to approach writing this companion text to her similarly titled solo exhibition. In the video, glowing vertical coloured bars appear and disappear accompanied with ambient sound. The work leaves an afterglow and the feeling you have been on a trip. As in the video with its mysterious presences and absences, there are contrary impulses at work in the exhibition. One is to explore forms of sculptural dematerialisation. The other is that each work is the consequence of ongoing artistic research – a rich, wild web of source material and cultural references resistant to being pinned down. Or put another way: there is a productive tension between her refined post-minimal formality and the spectre of highly subjective, intertextual thinking that bubbles up the moment anyone asks questions. Or coming from a different angle, as Marcus Steinweg has suggested: 'Stein's work attempts to open up a space of indeterminacy and to give this opening form...' Cutting to the chase 'I didn't want to pack the room with a lot of physical material,' the artist told me. 'It seemed wrong to me right now.' Each of the works in the exhibition approaches the sculpture-material dilemma in ultra-specific ways. No Consequences (2022), a silkscreen on mirrored cardboard, features the artist's cropped image of a famous antique bronze sculpture. Le Spinario (ca. 50 BC and perhaps a Roman copy of a Greek original) depicts a boy absorbed in removing a thorn from his foot. It is also one of the few substantially intact sculptures from the period not melted down for profit or war. (Art history is also the history of violent loss, fragments and questionable remakes.) In Stein's two-dimensional cropped reiteration, the sculpture gets a retro-Pop Warholian treatment. Stein is following in the footsteps of artists over the millennia who have created their own versions of the sculpture's enigmatic pose. But it was the sculpture's realism, and the idea of examining pain in order to move forward, which fascinated the artist. The work also points to the body as an interface between the cultural outside and subjective inside. On another wall, attached as delicately as possible, is L'autre (The Other, 2022). Made from glass tubes recycled from a neon sign workshop, the work suggests parallel brackets of the space between the glass. (It is a conceptual twist that all the works in this sculptural exhibition are against a wall.) Stein's work was inspired by a bracketed note in philosopher Ludwig Wittgenstein's Private Notebooks 1914–1916, written while he was on the front in WWI spotting for enemy fire. In text, square brackets indicate that something has been omitted, while in mathematics, they frame a matrix. The space between the brackets is scaled to embrace the viewer, and the title is perhaps an acknowledgement of the same. Wittgenstein's notes also include plenty of references to onanism as 'O', a symbol which is also a reoccurring figure in Stein's work to date. So don't be too quick with readings of the elegant sculpture LOL (reloaded) 2022. I think visual echoes are moments of synchronicity in Stein's works. A nod to sculptor Nancy Holt is implicit too. The pleasure of mining aesthetic quality from obsolescence and the resonance of material and past experience infuses the exhibition. For instance, Zu Hause kennt einen Jeder (At home everyone knows you, 2022), is a colour print made from ascan of a photograph of one of the artist's early sculptures which no longer exists. [...] The sculpture, constructed of painted balsa wood – the material of speculative models, not monuments – most directly recalls the tradition of minimalism with its interlocking squares and lines delineating planes. The re-mediation of the lost work creates conceptual distance. A programmatic space of reflection. This brings me looping back to Stein's video installation, which relies on bodily emersion and the quiet perception of nuance. The video installation is a proxy for a sculptural light installation that the artist decided not to make. [Dan Flavin...] I wonder if video art might now be where we thought painting was. [...] And if this is a post-video-art video? [...] There is weird solace entailing in anachronism, in the feeling of being from another space or time, or of manifesting in a present with critical detachment, but no irony. The digital animation is a montage of structuralist footage of obsolete street lighting technology – sodium vapour lamps – though the artist told me it is still in use at military installations. These lights change colour from red though to yellow as they heat, recalling dawn or dusk. Once yellow, they turn any surrounding colours grey. The accompanying sound composed by Carlo Heller – conceived as an equal and integral part of the work – is a tonal field of pulsing synths accented by the sound of breaking glass. While watching the video, more references fleeted across my mind's eye. I imagine a Romantic's walk in the forest, Barnett Newman's zips and Bridget Riley's stripes, and my own generations' ironic resampling of fatigued Modernism in the 1990s. [...] I am having a flashback – I am in a club, everybody is leaning against a wall, nobody is dancing yet, the music is very loud. I peer through shadows. [...] The name of the club might be Oase. -Dominic Eicher, Berlin 2022 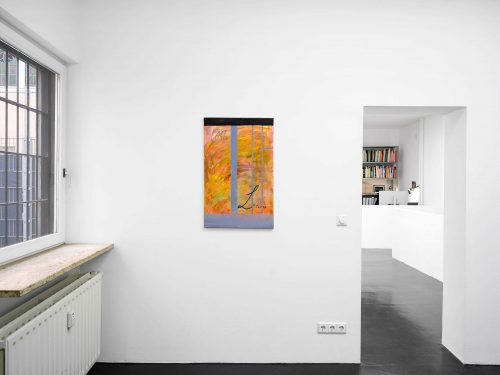